This time around, I'll be introducing my own rating system. Here's how it works:

Since I've been seeing a lot of movies in the theater lately, I've decided to rate films as "WORTH IT" or "NOT WORTH IT" in reference to both the cost of admission and the spending of time. As an added bonus, films that are so good that I must own them are "MUST HAVE."

MUST HAVE (already do)

This experimental screening was a lot of fun, though I must admit, the film itself is enough without the addition of active players.

John McGowan-Hartmann screened Carnival of Souls for my Film Theory and Criticism class. Loving its simplicity, its ingenious use of location, I only recently learned (thanks MovieDiva!) that the movie was made with a 6-person crew in three weeks on a $30,000 budget.

John was the best professor I ever had. He earned his PhD at University of Melbourne in Cinema Studies under the direction of the inimical Barbara Creed . I studied with him at the University of New Orleans in the Film, Theater, and Communication Arts department. In my first semester with him, I had to take an incomplete when my 1500 word midterm turned out to be a thesis which I've yet to complete because it almost gave me a nervous breakdown.

I still kept all my notes.

What is it about Mary, the film's protagonist, that resonates so with my own soul? Superficially, we couldn't be more different. I, who am so warm and accepting, enamored of religion. MovieDiva observes: "Mary is haunted by her inability to grasp reality, as her consciousness swerves in and out of focus.   But she is hounded by awful men, who refused to listen to her or see her as she is, even as they pretend to do so." Oh. Right.

I too have a penchant for confusing my realities. I, too, seek out unusual and abandoned places for exploration without regard for my health and safety. I, too, seek out the help of men I mistakenly appreciate as capable. I, too, find myself surrounded by fearful circumstances and, in the end, submit to and become that same strange shadow of the strong self I thought I was.

I, too, have mistaken myself for alive when really, something is dead inside my own dance macabre.

My first visit to the Chelsea was charming and I very much look forward to returning. It's a lovely old-school theater setup with a blessedly flat projection screen. And I finally saw my first Haneke.

Mulholland Drive, Twin Peaks: The Return, I Heart Huckabees - Naomi Watts has more than demonstrated her acting ability to my satisfaction, but this piece with Tim Roth had me gasping for air. It's a perfectly terrifying movie in its proximity to likelihood. Juvenile sociopathic boys have a way of getting under my skin. The level of anxiety reminded me of the viewing experience I have every time Lars Von Trier circles back around. One shot that sticks out most in my mind is the single, static shot of Roth and Watts, bound and incapacitated, struggling to release themselves from torment after the villains leave them to their own devices. The contortion of the human form left a deep impression on me. Which leads me straight in to...

While early reports claimed the 2018 Suspiria to be a remake of Argento's 1977 supernatural thriller, this was not at all the case. Fortunately, it allows for the 2018 film to have a life, a story, appreciable on its own while still participating in the world circa 1977.

I highly recommend that anyone with access to Alamo Drafthouse see the film in conjunction with the BIRTH. MOVIES. DEATH. pre-show programming, which illuminates the behind-the-scenes research that made the choreography of the new film so incredibly powerful.

Dance was the only one of the major "fine art" artforms I never really participated in, my 3 year old self notwithstanding. Structure was never my strong suit, and it's a bit funny to watch me twirling around by myself, completely in my own world, in those old home movies. Perhaps if I'd seen the transcendence of the work that inspired the choreography and its articulation in Suspiria I might have been more inspired.

The muddy cinematography and understated production design were a bit of a surprise, given their contrast to the original - so rich with color, and with some of the most strikingly beautiful production design I've ever seen in any movie. But we're all post-retro, and this new aesthetic - whatever the hell you could call it in this post-post-modern world - imbues a sense of morguish solemnity. The final sequences of both the dance itself and the final climax of the film have in color and richness what the entirety of the rest of the film held off on. The anticipation was held nicely, and more than worth the wait. This one is a must have.

Durhamites will be pleased to note that Cinema Overdrive will be relocating from the Cary Theater to the Carolina Theater in January 2019.

Having recently re-watched Easy Rider (courtesy of Durham County Public Library) and with no prior experience of The Last Movie (even the knowledge of its existence) I was pleasantly surprised to discover more Dennis Hopper to soak in. My first run-in with this bewildering character was his performance in my favorite film, Apocalypse Now. I can't say I wouldn't also have followed Mr. Brando to my own bitter fucking end. "If it dies, he dies, if he dies, it dies..."

Pretty sure I already claimed I was dead earlier.

BUT FIRST what really killed me and thrilled me beyond comprehension was seeing the name of the church, the church of Didymos Thomas with a verse from The Gospel of Thomas, saying 66:

"Show me the stone that the builders rejected; that is the cornerstone."

And so it was for Dennis Hopper. While The Last Movie was summarily rejected, in part due to its experimental editing and non-linear storytelling, Hopper's legacy now has the benefit of a 4K restoration and perhaps now can take its proper place of respect in the annals of cinema history.

What else? How about that wonderful relationship? Abuse in both counts - take everything the man can give you (including all those bruises) and feel jealous when he turns his attentions away after that wonderfully romantic utopian vision. Surely there will be gold. If there's ever a road to get there. Probably, though, the industrialists will simply swallow one whole and no pains will have been worth the trouble.

Oh my word there's that anxiety coming back again. 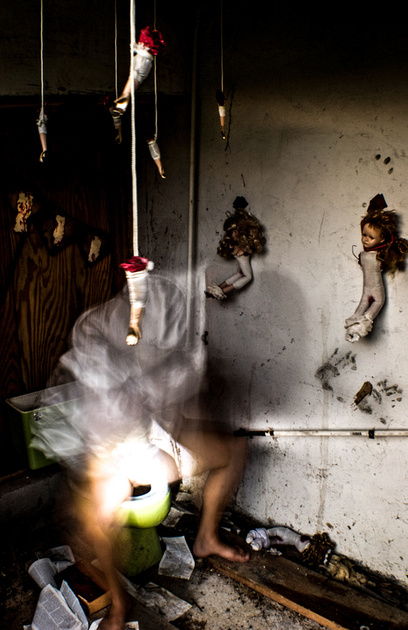 l'Annunciation of the Least Light-Hearted

Fast approaching the age of 30 and thinking myself quite grown, I now learn to keep some compassion for myself. There is tenderness when I think of the weight, too heavy for a child, of the speed and depth and starkness of light and how it came into me.

My annunciation does not always make me accessible, nor convenient, nor correct. My catharsis was self-induced, a way of resolving the enormous responsibility of breaking patterns and ideas that no longer serve growth.

And perhaps if I can save myself, that is enough to open the chasm to a different kind of world.

Logic, critical thinking, and science came as easily to me as spirituality, open-mindedness and art. My appetite for the bizarre, the peculiar, the idiosyncratic led me to fascinating territory in the kinds of cinema (and other art - music, dance, photography, painting) that demanded my attention. It also determined the formal expectation of many of my friendships. The art I was exposed to in my early years as a web-based emo kid military nomad became the cornerstone of my evolution as an artist and as a person.

If there should be anywhere to find wisdom, art could lead me there. A way to understand everything all at once. Eventually, explaining the nature of art consumed me. I collected non-fiction tomes centered around philosophy, metaphysics, art, and religion. I wrote a thesis about it in pursuit of my philosophy degree. I defended it to a room of professional philosophers, and excelled. Art cannot be defined by the artworld because its nature is to radically challenge the basis of all institutions.*

But it was not ever my intention to simply appreciate art as an observer. From a young age, I wrote, painted, drew, and photographed my world. I didn't know it at the time, but I was ensuring my own place in this reality - affirming my right to exist and participate in creation.

Art carries with it the peculiar capacity to collapse the seemingly separate worlds of subjective and objective into a single, indivisible reality. As the duality between subjective (self/subject) and objective (world/other) underpins every metaphysical assumption in the West since the Greeks, an escape from this duality is essential for the moral evolution of our species. This and other insights offered by Leonard Shlain in the oft-overlooked Art and Physics: Parallel Visions in Space, Time, and Light carry enormous implications for cinematic art. More than any other art, cinema consciously attends at once to space, and time, and light. Also like other arts, cinema collapses subjectivity and objectivity into a single expression, and at a greater complexity (a higher degree of miraculousness) than other arts.

So cinema is the art I choose to give myself to whole-heartedly, both in pursuing my own contributions to the medium and a sincere desire to share what insights I can glean through its appreciation and analysis.

*See also, Theodore Roszak's The Making of a Counter Culture (how 'technocracy' secretly underpins moral assumptions of most of the population, its violence in denigrating the amateur) and Robert Pirsig's Zen and the Art of Motorcycle Maintenance (intro to metaphysics) and Lila (full articulation of a cogent metaphysical system, the Metaphysics of Quality)