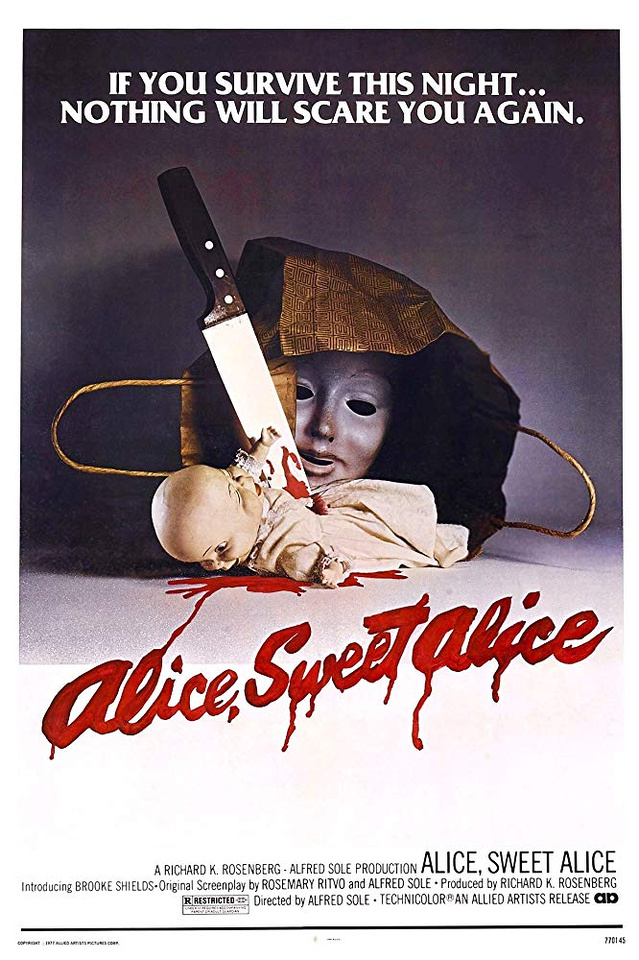 August’s screening of Alice Sweet Alice was one occasion that I thanked myself for making the trek from Durham to Cary.

That day, I was a Quaker who was going to pick up her Catholic – and since I have to specify, biological - father from RDU shortly after. Essentially, it helped to prepare me for spending a few days of that conflict.

Like Alice, it’s not all my fault but I’m not innocent from blame. Doesn’t keep me from being a horrible, troubled little shit.

Ultimately I just won’t let him convert me. I get mad when he sends me Catholic podcasts. I’d rather fight him tooth and nail about Thomas.

A young girl (child actress Brooke Shields) is killed in Church on the day of her Communion (which was the original title of the film). Was it her sister Alice? Is Alice a sociopath, as her aunt suspects?

Action, intrigue, tension to hang a wide curtain on, and careful production design. The Catholic symbolism might have been worth playing up, but the masks and complexity of settings beyond hammy Catholic wares were so compelling that I think it’s ok. Alice Sweet Alice is as much about mental illness as religion, as much about heresy as woman problems.

I was carried with often-baited breath by the lead actress, astonishingly beautiful Linda Miller, as Alice’s mother Catherine. I believed in her conflict – grieving over the loss of her least troublesome child and desperate not to condemn the older Alice as irredeemably bad.

I'd just read an article about a support group for parents of child psychopaths. I do not envy that position. No one does.

Just because you don’t like something doesn’t make it false. And just because some people experience maladaptation doesn’t make them evil. What mother would really want to believe they brought an evil child into the world? (Hearkening back, of course, to August's screening of The Visitor).

Though the film is a rarity, it has not gone completely. It's out there. And amazing. 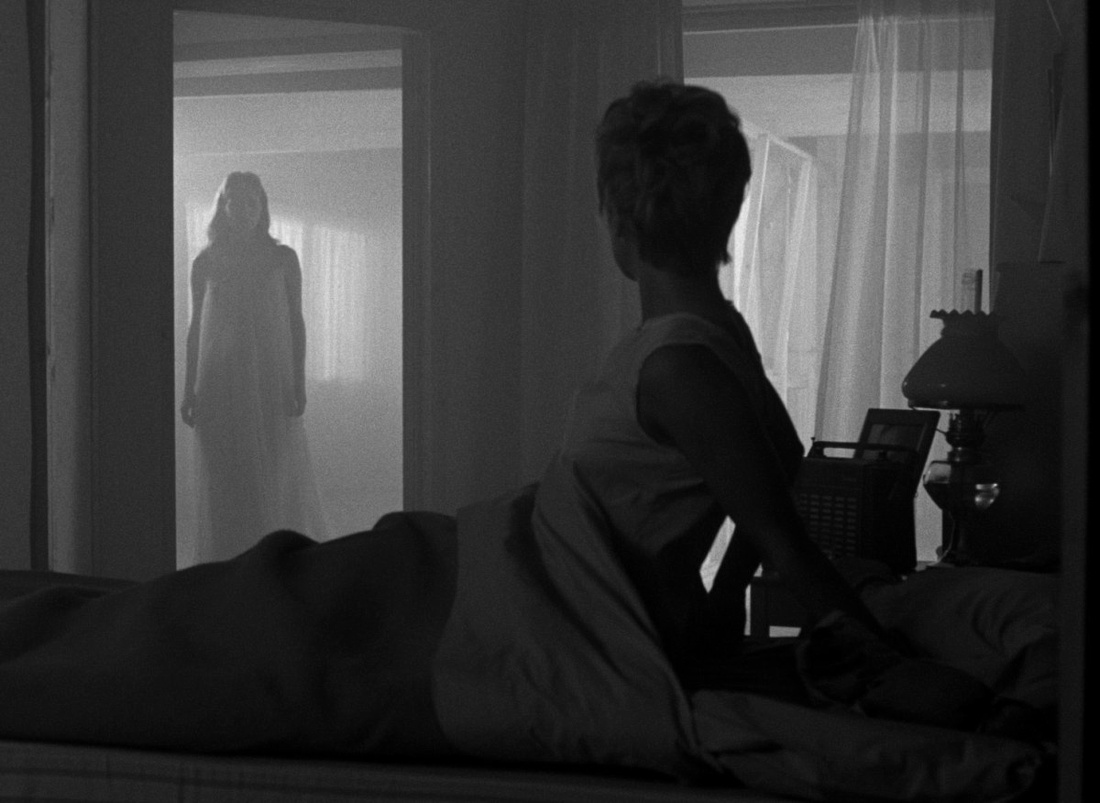 This is far too personal to write about. This unapologetic art film from Sweden in the 60’s and stars two women alone together. Facades vs. reality, kindness and hidden violence, maybe multiple personalities? It was like sacrament. And too personal to elaborate any further. Just watch it if that's the kind of thing you're in the mood for.

A/V Geeks Present: STOP MOTION EXPLOSION! A/V Geeks were kind enough to screen a consortium of video and 16mm stop-motion animated shorts in their STOP MOTION EXPLOSION! program. A sprinkling of Svankmajer made me a happy girl, but it was also wonderful to see Ray Harryhausen's rendition of some Mother Goose silliness. My favorite, however, would have to have been the pre-show short, Vanished History of Gloves by Czechoslovakian filmmaker Jiri Barta.

As a side note, no one does this style of animation as well as the Czechs. Just saying.

Then it was time for me to revisit two films that have as much to do with who I am as most films ever will, like it or not. 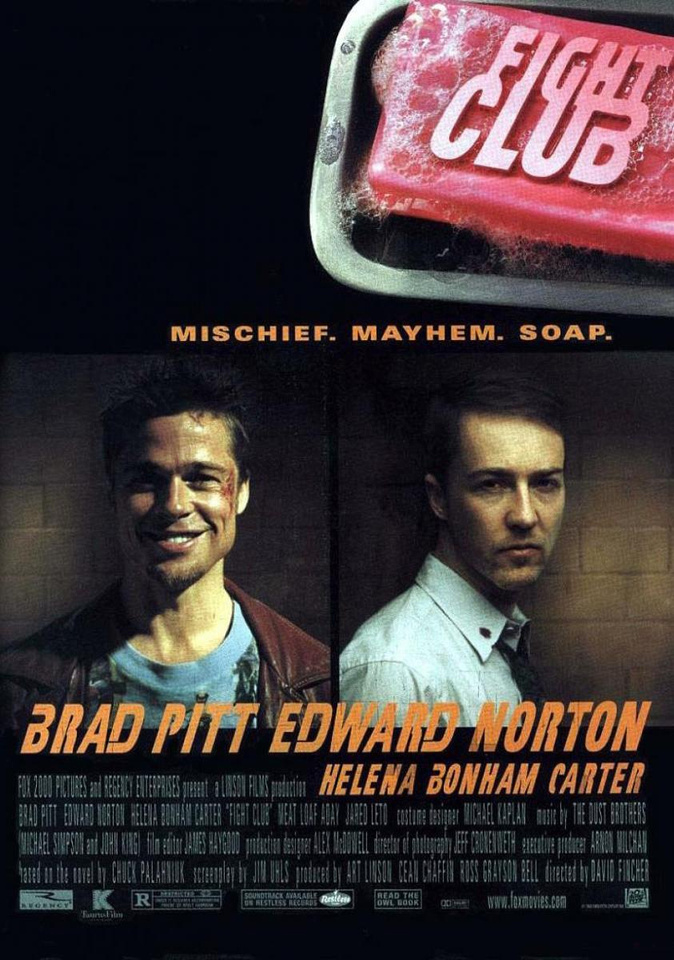 The Fight Club screening wasn't great, so I'm gonna try not to dwell on the negatives though they will be mentioned.

This movie made me want to make movies when I was in the 7th grade. It was referred to me by one of my internet friends, an artist called Z that I was in love with. But I'm not a kid anymore. Even though my new job makes me feel like I'm the adult version of the kid I was in middle school, spending all my time on computers. So now I’m 2.0 and the movie is aged.

Still, I find myself quoting it regularly in my head -

- more or less accurately, unlike whatever schlub they put in front of the audience to awkwardly solicit complements about the outfit he wore to announce “sticking feathers up your butt does not make you a chicken.” That was the only quote he got right.

There’s just too much more one could say about this film, aged or not. Anti-Corporatist, an indictment of our modern way of living, anxieties about appearances, crises of masculinity, broken people finding other broken people and trying to pick up the pieces, schizophrenia - there's so much to work with. I've probably seen it too many times to really enjoy it anymore. There are no more hidden surprises. Though, this time around, I did notice how well Fincher builds up to the identity reveal, with so many little clues.

But it’s meaningful to me.

Of course I went as Marla. I used to sign paintings that way. Now I blink my eyes and, at almost 30 years old, the transformation is nearly complete. 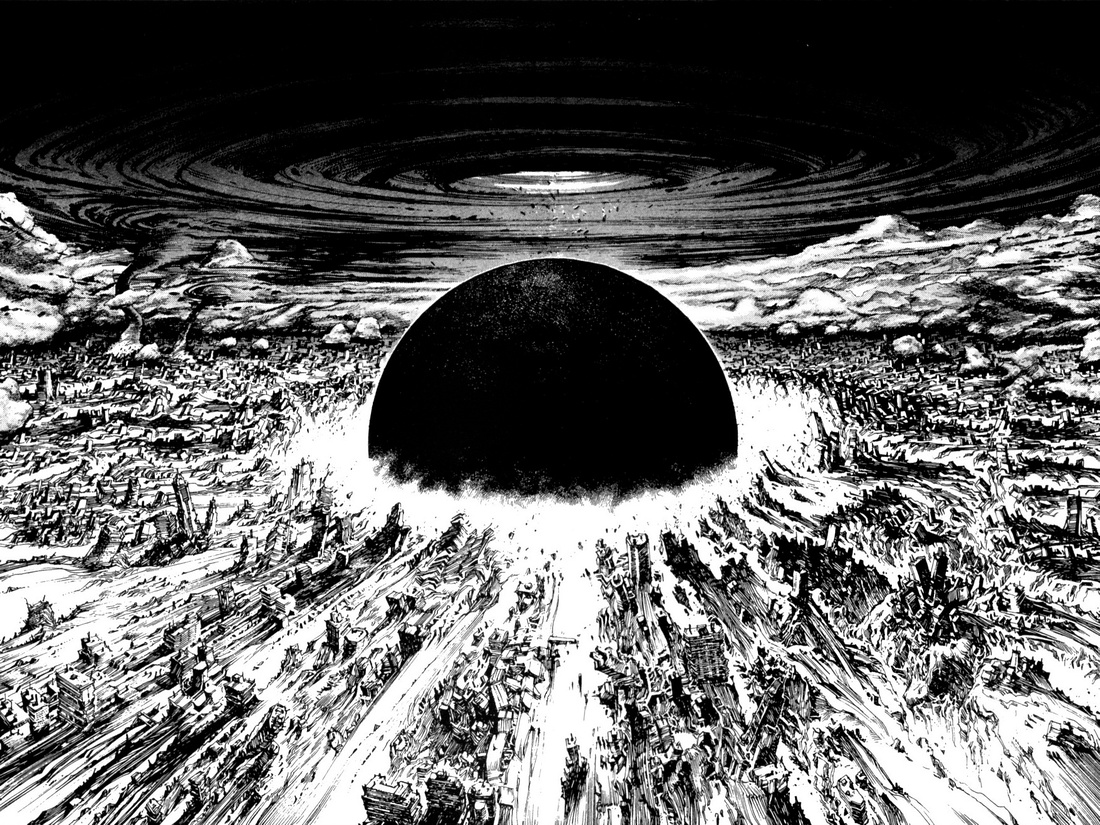 This was a real privilege. Really. I've seen this film enough times to have written an extensive tract on it. However, it's been quite a few years since I saw it last, and this was the first time I had ever watched it on a big screen. It was truly, legitimately, sublime.

Maybe one of these days, I'll dig out my essay on Godzilla and Akira as expositions of the Classical Mechanics > Quantum shift. The essay is smarter than me. I promise.

I feel really lucky to have landed back in North Carolina. Organizers like A/V Geeks and Cinema Overdrive feature rare programming that's hard to find, digital or otherwise. Keeps my training and education in film theory and practice from withering away.

In the age of mindlessly droning through titles on Netflix, Hulu, and other streaming services, it’s nice to have a source of closely curated content you didn't know you were missing out on. I try to attend screenings whenever I can.

If there’s something you REALLY think I should see and want me to write about, let me know!